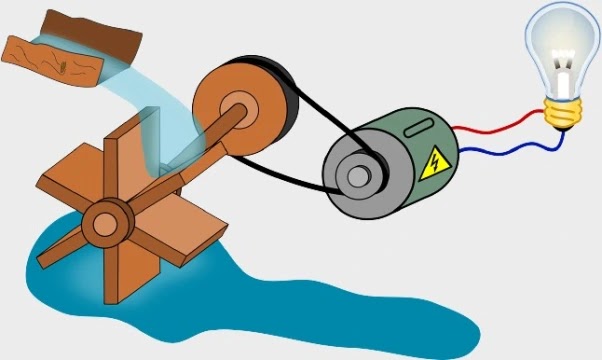 There are more than 6000 rivers with a total reach length of 45000 km flowing in our country. They occupy about 3.9 % of the total land of Nepal. The snowy mountains & glacier lakes are also our major water resources. This makes Nepal be the second richest country in water resources after Brazil in the world. Nepal contains 2.27% water of the total water resource in the world. Due to such resources, we have a huge potential for hydropower production which is theoretically found to be 83000 MW. Out of this, 42000 MW of hydroelectricity is feasible economically & technically.

Traditionally, a vertical axis water wheel called ‘Pani Ghatta’ was found to be operated using the river water current in Nepal. The Pharping hydropower plant (500 KW)  had been established as the first hydropower in Nepal in 1911 AD by PM Chandra Shamsher. It was also the second hydropower plant in Asia. It was established with a grant from British Government. Nowadays, it is not being operated for generation & the water from penstock has been diverted to the drinking water supply to Kathmandu by KUKL. Although, it has been placed in standby mode to operate occasionally & to demonstrate to the visitors. The second hydropower plant of Nepal was the Sundarijal Hydropower Plant of capacity 640 KW. It is still operating in regular mode & the tailwater has been diverted for drinking water supply to Kathmandu valley. Thereafter, different hydropower projects have been established in Nepal contributing to the total installed capacity of the country. Out of a total installed capacity of 1355 MW, hydroelectricity serves 1233 MW, the thermal plant serves 54 MW & 68 MW has been generated from alternative energy resources. (Economic Survey 2076/77). 90% of the population of Nepal is in access to electricity. Nepal has been declared as a load shedding free country in 31 Baishakh, 2075 BS. The budget of FY 2077/78 has allocated 1 Kharba & 5 Arba rupees for the investment in the energy sector.
Hydropower can play an important role in the overall economic development of a country. The vast hydropower potential can be the backbone of our national economy & lead us to prosperity. Keeping this in mind, the Government of Nepal has adopted Hydropower Development Policy 2058 in order to make proper legislation for the development of hydroelectricity in Nepal. The following classification is adopted for hydropower projects in Nepal.

It is located 500m away from the confluence of Aadhikola & Kaligandaki river in Syangja district. It is the biggest hydropower project operating in our country to date with a total installed capacity of 144 MW. The funding was done with the common efforts of the Government of Nepal, the Asian Development Bank (ADB), Nepal Electricity Authority (NEA) & the Japanese Government. The commercial generation from this hydropower was started in 2002 AD. It is a six-hour daily peak run of a river-type power station having an annual design generation of 842 GWh.

Upper Tamakoshi hydropower, located at Dolakha district, is one of the national pride projects of Nepal whose construction was started in 2008 AD. It is still under construction & has a generation capacity of 456 MW.

This multipurpose national pride project aims to deliver year-round irrigation facilities to the cultivable land of Bardiya & Banke district along with the generation of 5.48 MW electricity as an additional aim of the project.

The Arun III hydropower project is being developed on the Arun river of Sankhuwasabha district & is expected to have a generation capacity of 900 MW. A power development agreement (PDA) was signed with Satluj Jal Vidyut Nigam (SJVN) for the execution of the project. SJVN will operate the project for the concession period & then ownership will be transferred to the Government of Nepal. During the concession period, Nepal will get free power as a result of PDA.

Upper Karnali hydropower is an export-oriented hydroelectricity project to be developed by Grandhi Mallikarjuna Rao (GMR) group which is an Indian company headquartered in New Delhi. Out of 900 MW power generated by GMR from Upper Karnali, they will export 500 MW power to Bangladesh whereas Nepal gets 108 MW of free energy & the rest of the power will be utilized in India.

Kulekhani III is another major project that has started generation in the fiscal year 2076/77. Its first & second units started generation as test operations from 15th Ashoj 2076 & 24 Ashoj 2076 respectively. The project is located southwest of Kathmandu in the Makawanpur district of Narayani zone & Bagmati Province.

Here is a list of the biggest 50 hydropower projects based on installed capacity. It is an updated list of hydropower projects extracted from the annual book of NEA released on Bhadra 1, 2077 on the occasion of the 35th anniversary of the Nepal Electricity Authority.