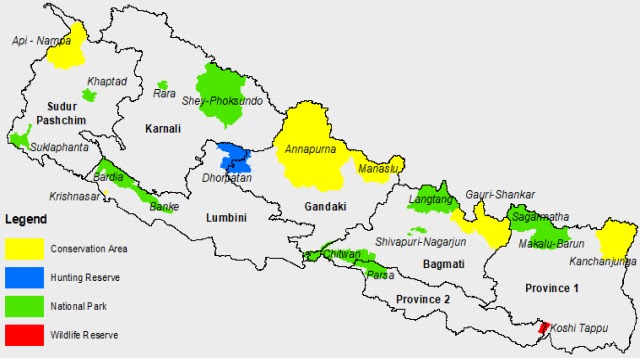 There are six conservation areas in Nepal to protect natural ecosystems and to use natural resources sustainably. They are generally large and most of the areas are in natural conditions.

Dhorpatan Hunting Reserve is the only hunting reserve in Nepal established with an aim of preserving a representative high altitude ecosystem in west Nepal and allow sports hunting of blue sheep and other game animals.

These are the wetlands (having water depth less than 6m) conserved by an intergovernmental treaty, known as Ramsar Convention held in Ramsar, Iran at 1971 AD.

Protected Areas of Nepal comprehends twelve national parks, six conservation areas, one wildlife reserve, and a hunting reserve that covers most of the forested areas ranging from lowlands to the high snow-capped mountains, fringing a multitude of landscapes and taking care of a vast biodiversity present in the realm. In addition, numerous Ramsar sites (wetlands) have also been safeguarding innumerable floras and faunas.