The process of controlling the flow in river & river bed configuration is called river training works. These are the structural measures adopted in rivers to avoid outflanking & shifting its thalweg due to geomorphological changes in the river. So, the river training works stabilize the river channel along a certain alignment.

Different methods employed for the purpose of river training are as follows:

These are the bell mouth-shaped bunds constructed on either side of a river in order to restrict the width of the waterway across the hydraulic structures. It was first introduced by Mr Bell so-called Bell's Bund. These are also earthen embankments with stone pitching on the slopes facing the river water.

Meandering rivers are induced to flow in a straight path by constructing the artificial cutoffs. A pilot cut is excavated in case of a river in an erodible bed & the flood water gradually enlarges the pilot cut while shifting its path. 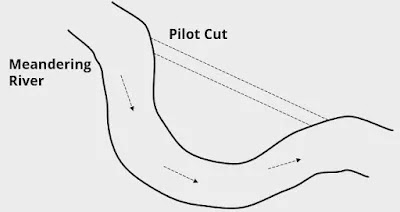 These are the artificial islands constructed at the river bed. It consists of a sand core protected by stone pitching. It obstructs the flow of the river & turbulence is created around it. Due to the turbulence generated, the river bed gets deepened at the vicinity of the island & holds the flow permanently thus attracting the flow away from the attacked bank.